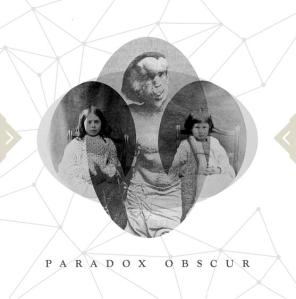 Paradox Obscur’s debut self-titled album is now available for pre-order on Peripheral Minimal, presented in a jewelcase CD and limited to just 200 copies, with artwork by Frantz Schlusselhuber.

Rhodes is the basis of this project. A duo consisting of Kriistal Ann and Toxic Razor, two nick-names appropriated by Anna Michailidou and a furtherly unknown figure whose real name I haven’t found out about. For the solo-project that is called Kriistal Ann, Anna Michailidou created a release last year for release on Werkstatt Recordings, titled “Refraction” – a solo-project based in and out of goth mixed with dark-wave – showing a whole other side of herself. Even though she’s intimately connected with Paradox Obscur, the difference lies in the approach that the duo has in comparison with her own project. The aforementioned project is based out of dark minimal synths with a cold-wave atmosphere, content at leaving the listener in a dismayed landscape of sound – harnessing a deep inner-feeling – charged with an ambulation of emotional lyrical content. A rather bleak introductory to a sound they’ve been working on since releasing a few tracks here and there, some on their own Soundcloud and one for the Parisian podcast-mixes courtesy of M N M L. After a while, before they even had announced the release of their self-titled debut, I got introduced to their sound for real by Jason of Peripheral Minimal. – Repartiseraren